Nan Hawthorne’s Booking the Middle Ages: Historical Fiction Round Up, Holiday Gift Edition – Hello Nan!
Wanted to share my latest novel: BLACK BART: THE POET BANDIT…..NOT the story of the pirate Black Bart, but the story of California’s most elusive and successful stage bandit who left poetry at the site of a few of his holdups AND never held up a passenger. He was also known as the gentleman bandit and used a plugged shotgun. Was a fascinating fellow and this novel is the first full novel written about him. There have been hundreds of articles about him, and a couple nonfiction accounts of his robberies, but this book, which I co-authored with Lou Legerton, is about Charles E. Boles, aka Black Bart.

It’s been receiving some good reviews. My first novel, ACROSS THE SWEET GRASS HILLS, is also an historical fiction, but is a romantic drama, based around the infamous Marias Massacre in 1869 in Montana. It won the 2002 WILLA Literary Award for Best Softcover Fiction, from Women Writing the West.

Thanks for letting me share!
Gail L. Jenner
gailjenner.com 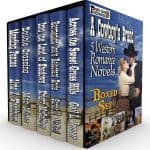 Great stories, heart warming romances, and plenty of adventure.
Mending Fences: nice heart warming Texas cowboy vs Baltimore Lady in the small town in no-where's ville TX.
Double Crossing: great adventure crossing the country from Chicago to Sacramento. I was hoping for another chapter or two at the end to bring things to a romantic conclusion. :(
Harmonica Joe's Reluctant Bride: Time travel for Lola from present to 1910 is a bit shocking. But to discover everyone thinks she is the low-down, no-good, thieving Callie MacGraw is unbearable. But nothing to discover she is now married to a man she doesn't know.
Into the Land of Shadows : Kate's adventurous is something. From donkey theft to being kidnapped to being possessed by an Indian demon. Falling into a rapid flowing river to falling in love with Ethan. Then to discover who caused her pa's death and forgiving him. In the few short years of her life, Kate has had a whirlwind adventure.
Across the Sweet Grass Hills: Liza hates the Indian's and everything she has heard about them is terrifying. When she has to rely on an Indian (Red Eagle) to save her father's life she starts to change her mind. But when she learns she is a granddaughter of an Indian Squaw she blows a gasket! Living with the Pikuni Indians with her father she changes her opinion. After surviving a US Army attack on the village of peaceful people she is again unsure of who the real enemy is.
5 Stars