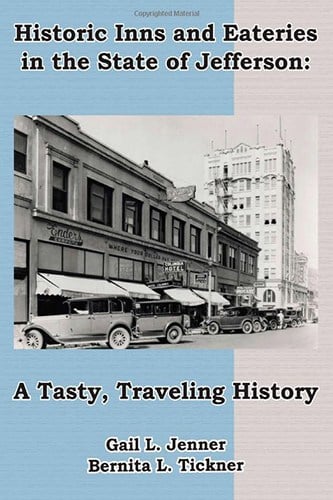 Historic Inns and Eateries in the State of Jefferson: A Tasty, Traveling History (Volume 1)

Yes, the State of Jefferson exists, and it exists as more than a fantasy

According to many who reside here, the real State of Jefferson, however, is characterized by a state of mind, not a state with borders. Thus, today’s Jefferson-staters can be found in counties along the California coast or down in the Sacramento Valley, near the Nevada state line, or across southern Oregon, which means there are potentially more areas that claim the designation than those included in this guidebook. We have selected, therefore, those counties that have been consistently identified with the geographical boundaries of the one-time “49th” state and today’s “proposed 51st” state.

Like the rugged mountains that dominate the region, Jefferson’s struggle for statehood has been defined by its history. Beginning in 1852, a bill to divide the territory into a new state was introduced into the California State Legislature at Vallejo. Though the bill failed, the concept did not.