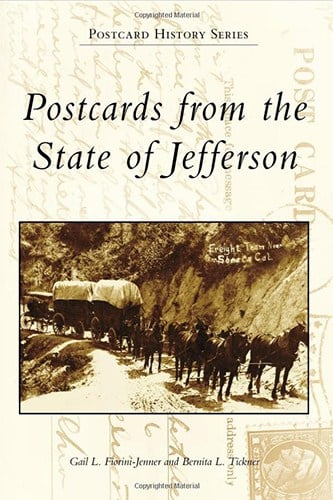 Postcards from the State of Jefferson (Postcard History)

The “”State of Jefferson”” refers to the rugged and wilder portions of Southern Oregon and Northern California. With majestic Mount Shasta at its heart and the Cascades as its backbone, this area has been home to several Native American tribes for generations. It became known as the “”northern mines”” during the famous Gold Rush of 1849. Today, the area is famous for its wild rivers and forested mountainsides. While mining, logging, and ranching were the “”state’s”” first industries, recreation and tourism now compete as major industries.

Throughout its history, the desire to create a separate state has remained as strong as it was in the 1850s. In 1941, citizens rallied to create a 49th state. The would-be Jeffersonites held a gubernatorial election and even created a state seal: a gold pan etched with two Xs, signifying the double-cross by Salem and Sacramento politicians. The seal can be seen on flags and other State of Jefferson memorabilia, and those who reside here still manifest the independent spirit that has characterized the region.