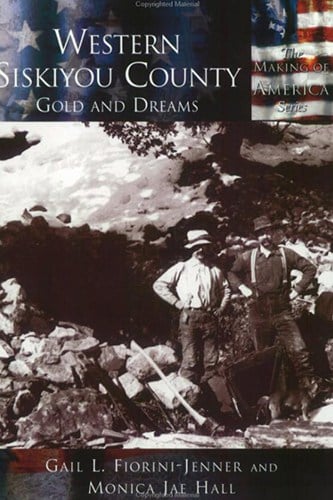 Pays homage to the citizens who made this land home

Western Siskiyou County spreads its picturesque bounty across the mountains of California between the Sacramento Valley and the Oregon border. Encompassing such magnificent wonders as the Klamath National Forest and the Marble Mountain Wilderness-Primitive Area, Western Siskiyou County enjoys a rich history. The Shasta and Karuk tribes have inhabited the area for thousands of years, and they thrived in this rugged landscape before Russian fur trappers arrived in the 1830s. The dauntless Native Americans and subsequent settlers have employed gold, timber, ranching/farming, and recreation to support their community since 1850.

A new history, Western Siskiyou County: Gold and Dreams pays homage to the citizens who made this land home. These captivating stories are revealed through both word and image, echoing the voices of the past that speak of struggle, sacrifice, and the courage and perseverance needed to triumph over the wilderness. Stunning photographs and heartfelt narrative commemorate the people, places, and events that set this diverse community apart. Readers will be enchanted by tales of the largest gold nugget discovered during the gold rush in Scott Bar, the destructive great flood of 1861-1862, and the baseball craze that seized the county in 1911 when the Etna team won 13 games in a row.