Well, finally, after more than a year and a half, coauthor Bernita Tickner and I are excited to announce that our newest book featuring the marvelous, mythical State of Jefferson is about to hit the shelves: HISTORIC INNS AND EATERIES IN THE STATE OF JEFFERSON, from Old American Publishing, will be released in the next couple months! For those new to the concept of the 51st state, the State of Jefferson, it encompasses much of northern California and southern Oregon — from the coast across to state line. The “borders” of this state have often changed through the last 150 years, but the notion has never died!

Not only does the book, HISTORIC INNS AND EATERIES feature history and vintage photographs of some outstanding historic places to eat and/or stay, it also feature RECIPES from those locations. As I have told more than one friend, this is the kind of book I look for whenever I travel. What more could you ask for? Photos, history, sites to see and learn about, and great recipes!

It should be a great book for tourists, locals, historians, and cooks! I’m so thrilled that it is coming out this year. It will make a great gift for the holidays, too. 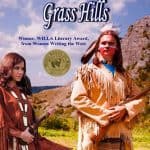 First, I love the title of this novel. The story is at once bitter and sweet; cruel and compassionate; and heart-breaking and heart-warming.
Liza Ralston is a brave young woman, even thought she is completely out of her element. The chance meeting with Red Eagle saves her father's life, but it sets her mind and heart into turmoil. She learns how to survive and cope in the wild on her own while she cares for her father, willing him to live.