Although the calendar spells summer, there has been little heat — in the traditional sense — this summer. Unfortunately, however, we have suffered from the stifling over-reach of federal and state agencies this year. It has been an exhausting and discouraging year in agriculture. No wonder 75 farmers and ranchers are leaving the industry daily. No wonder young farmers and ranchers are not returning to the land. While America “cheers” on small farmer markets, etc., they do not understand that those producers are only a tip of the industry. More than 95% of all ranchers and farmers are family-owned corporations, and the myths that have been perpetuated that “BIG” farmers/ranchers are taking over, the truth is that family operations produce the majority of food in this country. The American economy relies on us in a much bigger way than most consumers realize. Sustainable farming also means keeping farmers/ranchers on the land — sustaining their livelihoods.

I point this out because it is an issue that affects rural America in a serious and disturbing way, particularly in our neck of the woods. In spite of the fact that ranchers like us have worked for years in cooperation with state agencies and have provided access to and coordinated efforts to improve our ranching operations, we find ourselves under fire. Though more and more research lends itself to the improved sustainability of ranching and farming practices, the facts do not seem to find their way into the hands of the average American. The contributions to the environment; conservation; animal care and practices — all of these issues are rarely brought to light.

Much is amiss. Unemployment in this area of California is well above 30%. Jobs are almost impossible to find in small towns and rural counties. Agriculture is the last bastion of industry, except for tourism, which — although it can and will bring in some dollars — cannot sustain the small communities that rely on family farms/ranches. If consumers think that these issues, including water, land use, regulation and over-regulation, rising permit fees and duplication of permitting and the almost-impossible ability to acquire those permits, is not going to trickle down into their dinner plates, they are much mistaken. Food will no longer be an easy commodity for most Americans; it will become a luxury…..

It would behoove every American to read between the lines when they hear “reports” about what is happening in agriculture. Agriculture represents the most under-represented minority in America: we are less than 2% of the population, yet provide well over 25% of the jobs and perhaps more than that when you look “down the line” at the jobs that revolve around food/consumerism/retail markets, etc. 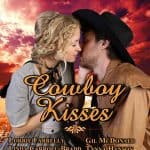 Wonderful writers, each with their own style, sharing stories of the heart that are great reads for any season. Loved the collection.