ANKLE HIGH AND KNEE DEEP……… #3 on the Top List for books on rural life!

Was delighted to learn that our anthology, ANKLE HIGH AND KNEE DEEP, just released officially in June, reached #3 on amazon’s Top List of books published on “rural life” and country living! 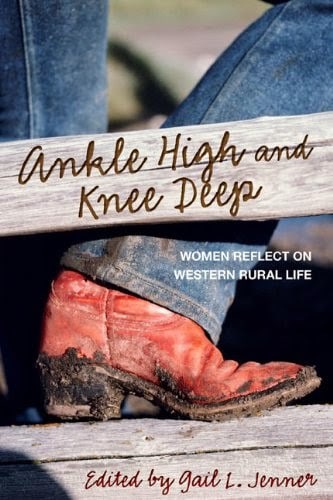 It’s been a great journey…..from pitching this story over 2 1/2 years ago to the editor from Globe Pequot/Two Dot, at a Women Writing the West writers’ conference….to working with 40 women from all over on memoirs and stories they had about their lives. The book also features over 20 photographs.

A wonderful collection — some selections funny, others poignant. Something for everyone!

I’ll share here one of my contributions to the anthology, entitled “Birth.” I wrote it just a couple years into our marriage, when I had to help my husband with a young cow struggling to give birth…..

Birth
Gail L. Jenner
“Oh, Doug, is it going to be all right?”
“I don’t know. It don’t want to come. Maybe the calf is turned.” My husband pulled off his long-sleeved shirt and dipped his hands into the bucket of soapy water before turning to her. His hands entered easily, but the cow resisted when he pushed his arms in up to the elbows. “Come on, Mama.”
As the cow strained against the nylon halter I held taut, I swallowed the bile that burned my throat. At the same time, a series of groans rose up out of her throat, then her legs, shaking uncontrollably, gave up beneath her swollen body. She dropped to the straw with an ominous thud.
“Is the calf turned the right way?” My words, barely spoken, tinkled like coins in the empty barn. I dropped the end of the halter. This cow wasn’t going anywhere.
Doug hesitated, brows drawn together, tongue moving across chapped lips. “The head’s okay, but one leg don’t seem to be.”
“But will it live?”
He grunted, trying to wipe his chin against his shoulder. “Not unless we get it out soon.” He withdrew his hands and stood for a moment. He glanced up at me. “We’ll have to pull it.”
With bloodied fingers, he picked up the length of chain he’d dragged out of the pickup earlier. The links of the mechanical stretcher clanked noisily.
I frowned as he circled and fastened one end of the chain around a small pair of hooves barely protruding from the young cow’s enraged cavity. Still down and panting, she twisted her head back until that the white sockets of her eyes bulged.
I held my protest. I knew Doug was doing all he could.
“When I start to pull,” he ordered, handing me one end of the chain, “make sure it don’t slip off.”
The hard links rattled as Doug pulled on the lever – once, twice; the sound sent chills down my back, reminding me of fingernails scraping against a chalkboard.
Doug yanked on the pulley again. “Hold it steady!”
The chain grew taut, but the calf didn’t budge. The cow’s belly ballooned with another contraction and she gasped.
I shrank back as she bawled again. “Oh, poor Mama,” I whispered. Why was life such a struggle?
Disgusted, Doug dropped the pulley contraption and shoved his hands back through the slimy opening, leaning forward to negotiate a better hold on the buried calf. Pearls of sweat trailed down his lean cheeks and they shimmered in the lopsided beams of amber light provided by his old pickup’s headlights.
He scowled as he probed and prodded, pushed and pulled.
Night finally edged in, the darkness filling the barn like spilled ink. Dinner hour long forgotten, I could not have moved away from the young mother even if I’d wanted to.  I was still new to marriage and this ranching life, and I hadn’t realized how tenuous life could be.
“Hey!” Doug interrupted my thoughts. “Give me that hammer and chisel.”
“Oh,” I groaned, reaching for the tools he had brought – just in case. Then I turned away, unable to watch. Only in impossible situations did a farmer or vet choose to split a young cow’s pelvis.
Hopefully it would heal.
“I have to,” Doug whispered. I nodded, touched by his attempt to ease my discomfort.
The hammer hit dully; the job was done. Throwing the tools aside, he moved swiftly. He reached for the calf’s hooves and tugged. Like a soft ripe banana, the bloody body of the bald-faced calf oozed out onto the damp straw.
Dropping to his knees, my husband wiped the afterbirth from the calf’s nose and tongue, but the tongue dangled like a fat pink tube sock, and its eyes stared blankly into the empty night.
Taking a quick, deep breath, Doug pressed his mouth over the calf’s. Sealing both nostrils, he blew breath after breath into the limp body.
I waited, tears slipping unnoticed down my cheeks.
Time passed cruelly.
Finally Doug leaned back and frowned. His eyes reflected my fear. “Too late. Too damn late.”
No! I took a step forward. You have to live. You can’t die. I held my breath. I felt Doug exhale slowly, but he avoided my glance.
And the cow, exhausted, lay, panting, her head flopped over in the straw as if she’d turned away from the awful sight.
Doug dragged the calf aside, his own face dark with unspoken disappointment. Then he returned to the cow.
He rested one palm lightly on her hip, but she didn’t move as he inspected her and cleaned her off; neither did she flinch when he gave her an injection of antibiotic from the small black bag he always carried with him.
But I couldn’t stop the tears. Turning slowly, I looked out at the stars scattered like fool’s gold across the black dome of sky. Life. Death.
I turned back to the young cow.
Doug was massaging her back and shoulders, mindless of the cold air against his wet, stained arms and hands, compassion written across his weather-stained features. “I’m sorry, old gal,” he whispered.
Slowly he coaxed her to her feet and pulled off the halter. She trembled, but seemed to gather her strength in the next moments.
It was then his glance trapped mine.
I winced.
The cow bawled.
He smiled tentatively. There would be another birth, his eyes said.
Perhaps another death, I wanted to retort.
Perhaps. But always, life prevails. 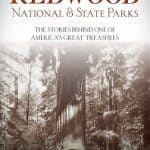 Excellent history and photographs - well written and gives an in-depth understanding of the importance of the Redwoods in California.